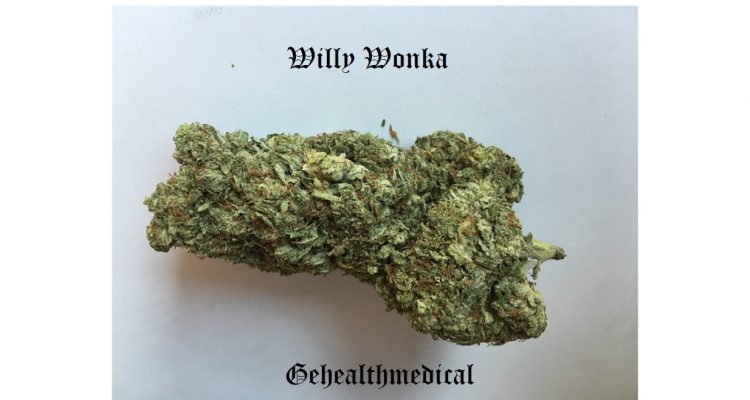 Roald Dahl would be proud. Maybe. This recent homage to the beloved author and his greatest literary creation placed in the 2014 Denver Cannabis Cup in the form of a THC concentrate. Willy Wonka is a sativa-dominant mix of Willie Nelson and Sweet Tooth (precise sativa/indica ratio unclear). It’s hard to find any information about exactly how much THC this strain has, but it reportedly delivers a moderately potent high. The experience is both cerebral and physical, with deep relaxation, a calming body buzz, and sleepy couch-lock effects. That makes this a very good choice for patients with anxiety or insomnia, though a full list of uses is hard to come by. The smell and flavor are reminiscent of candy, as the name suggests, though there are also pine notes to the taste. The buds are lime green with flecks of brown and a decent layer of trichomes on the surface. There are no widespread reports of adverse effects, but dry mouth and dry eyes should be expected. This strain sells best on the West Coast and in the American Southwest.

Flowers of Willy Wonka tend to be on the smaller side. The nugs, which cling together in a dense, clustered bud structure, are broad at their base and taper into a spade-like point. Hairy red pistils twist their way through the tightly-packed leaves. The leaves themselves are what really make Willy Wonka stand out — a mossy green, they are often mottled with deep shades of purple. These surprising hues are the result of pigments called anthocyanins in the plant’s genetics. When agitated by cold weather, these pigments create shades of blue and purple in much the same way that depleted chlorophyll levels cause foliage to change color in autumn. Finally, much like the similarly alliterative strain White Widow, Willy Wonka is covered in a blanket of translucent white trichomes that account for its psychoactivity.

The sharp smell of citrus wafts up from cured flowers of Willy Wonka; many smokers also detect distinct notes of apricot in its aroma. Underlying this fruity bouquet is a dank base of pine and damp earth. Breaking open the buds also reveals hints of musk. When combusted, Willy Wonka burns with a smooth smoke that’s easy on the lungs and sinuses. Appropriately enough, this sweet smoke tastes like rich cocoa on the exhale; Willy Wonka himself would doubtless be proud of this unique mix of flavors.

Something of a creeper, Willy Wonka may take several minutes before its effects begin to emerge. A slight distortion of sight and vision is accompanied by surging feelings of euphoria. Endowed with a burst of energy, smokers may feel moved to engage with their surroundings, making this a great strain for exercise. The strain’s lasting feeling of focus can also set the mood for work productivity, whether you’re in a creative or a more analytical field. In social settings, Willy Wonka can inspire intense, engaging conversations with like-minded companions. As the high wears on, users may feel a slight tingle or a mounting sense of relaxation — but this bud isn’t likely to bring about inescapable couch-lock. A great choice for daytime use, Willy Wonka is just what the doctor ordered for a soothing wake-and-bake session; consumed at night, it’s more likely to keep smokers buzzed and alert before bed. For those with a high THC tolerance, Willy Wonka’s effects tend to taper off relatively early.

Willy Wonka can have several uses for medical cannabis patients as well. Its clear-minded lucidity can be a boon to those with attention deficit disorders, greatly improving focus. Its ability to elevate mood can also temporarily relieve the troubling symptoms of stress, depression, and anxiety. Because its physical effects are more subtle, Willy Wonka can be great for mild irritations like headaches or nausea but may not work as well in soothing chronic, nerve-related pain. Because its initial are energetic without being overly cerebral, this strain can be a great choice for those who are prone to panic.

An agreeable, low-key sativa hybrid, Willy Wonka is versatile enough for use alone or with a large group of friends. For a full Charlie and the Chocolate Factory-themed smoke session, pair this strain with the more balanced Golden Ticket.

You can find out about Bacio Gelato Marijuana Strain here!

Willy Wonka weed is just perfect for daytime use because it makes smokers more concentrated, endowing them with a burst of energy. These are just two factors that can make your day more creative and productive and fulfilling because they set the mood for work and even socializing. Users reported that Willy Wonka marijuana stopped the feeling of worry and panic attacks well and chilled their racing heads so that they could accomplish the daily missions. Its THC level is from 21% to 24%, so beginners should start with a small dose.

Willy Wonka is a sativa-dominant cross between Chocolate Thai and Cinderella 99. It produces medium-height plants thanks to its hybrid heritage. Willy Wonka has an average flowering time between 56 and 63 days indoors or early October outdoors in the Northern Hemisphere. The strain is known to produce high yields in ideal conditions. Willy Wonka does well indoors and out.

Willy Wonka is available as seeds but only in Spain.

Willy Wonka is a sativa-dominant cross between Sweet Tooth and Willie Nelson. It produces short plants despite its sativa heritage. Willy Wonka has an average flowering time between 56 and 60 days and is known to produce medium yields in ideal conditions. The strain is supposedly easy to grow indoors or out.

Willy Wonka is not available as seeds or clones.

Willy Wonka cannabis strain is a cross between Willie Nelson and Sweet Tooth.

Willie Nelson is a pure Sativa strain bred specifically for the American country singer of the same name. As the story goes, he tried it once and bought the entire first crop. The sweet and sour smell leads to an almost lemongrass taste that almost immediately has users feeling an uplifting of their moods and a strong euphoric happiness. Many users feel an increase to their creative spark and are filled with energy. Unfortunately, there are side-effects, users may feel a lack of moisture in their mouth and eyes, possible paranoia, headaches and dizziness.

An excellent strain for morning use, this strain is most often used by those looking for reprieve from the effects of stress, anxiety and depression. Willie Nelson may also help make minor to mild chronic aches and pains more manageable. Others have chosen this strain to alleviate the effects of nausea, glaucoma, migraines and inflammation.

Sweet Tooth is a popular marijuana strain that won the High Times Cannabis Cup held during 2001. It is a hybrid of Indica and Sativa varieties and produces a prominent Sativa high. The plant produces a good yield and has long deep green colored leaves. The strain has a rust and green colored appearance that looks quite pleasant. It has a THC level of 16.45 percent. Its ancestors include Nepalese Indica, Afghani Indica and Hawaiian Sativa. It has an extremely strong and pleasant taste that is a combination of earthy, sweet and flowery flavors. It has a lovely smell that is quite woody and flowery. This is not the best strain ever, but it certainly has a very long lasting pleasurable effect. Its prominent effect on your system is euphoric. In addition to that, it has an uplifting and invigorating effect on your nerves. You begin feeling happy and relaxed after smoking Sweet Tooth. It also makes you feel lazy and creative at the same time. Sweet Tooth is excellent for treating stress, anxiety and depression. It calms down your nerves, providing you relief from these troubles. Moreover, it can also be used for soothing various mild and chronic pains. Some people also use it for curing insomnia and loss of appetite. Its side effects include dry eyes and dry mouth.