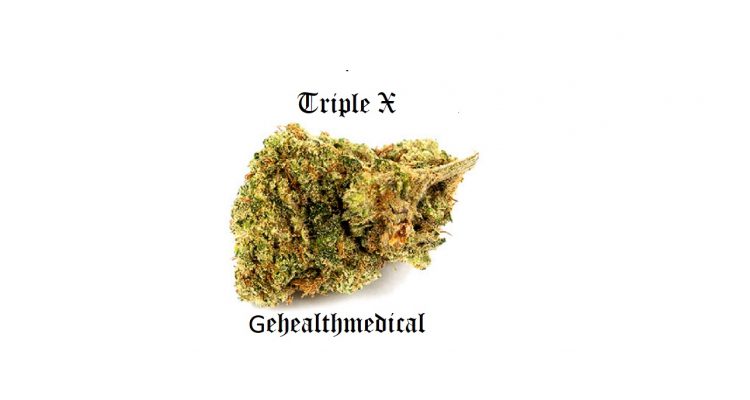 XXX OG is immediately set apart from the pack with chunky, medium to large-sized flowers. These flowers are spherical in shape and have the dense and heavy bud structure typical of indica varieties. Leaves are a mossy green and are packed full of orange pistils. Some phenotypes of the strain also exhibit vivid streaks of purple — these purple hues come about when pigments called anthocyanins are agitated by cold weather during the growing process; this mechanism is similar in principle to the changing of foliage in autumn due to depleted chlorophyll levels. Cloudy white trichomes coat the outer and inner surfaces of the leaves, making them very difficult to break up by hand.

The influence of OG Kush in this strain’s aroma, which is more earthy than fruity. Notes of damp earth and pine predominate. Some sharp citrus tang hangs out underneath, brightening up this dank profile. When combusted, this strain gives off a surprisingly smooth smoke for an indica. On the exhale, it leaves a cloyingly sweet and slightly peppery taste that lingers on the palate.

You can find out about Purple Punch Marijuana Strain here!

While you can detect this ammonia odor in Triple X’s fragrance, it is dampened by its overall earthiness. It smells of moist, freshly-dug earth, with prominent piney notes. Some say that Triple X also has a subtle sweet scent coupled with a fresh floral fragrance.

When combusted, Triple X’s smoke is exceptionally smooth. The earthy, piney notes present in its fragrance are its most prominent flavors.

The good news is that Triple X seeds are available online. Alternatively, growers can source clippings from a mature Triple X female plant to grow a clone.

While this strain can be grown indoors or outdoors, experienced growers recommend indoor cultivation. The indoor flowering period is reasonably lengthy at 9-10 weeks. Those growing Triple X indoors will need to prune their plants regularly and can expect an average yield.

Outdoors, these plants are typically ready for harvesting around late October and produce a reasonable return.

One of the primary medicinal reasons for consuming the Triple X strain is to manage sleep-related disorders like insomnia. As mentioned, Triple X has relaxing effects, which intensify to the point that users become drowsy. Therefore, those looking to manage insomnia, or who want a peaceful night’s sleep, may find Triple X useful.

Another common reason why people use Triple X is to address mood disorders like depression. Some may also find this strain’s sedating effects useful for alleviating pain.

It is not known whether Triple X is useful for PTSD or if it has any antiemetic properties.

Largely overshadowed by its more well-known offspring, the Triple X strain still has plenty to offer to cannabis consumers. Both experienced recreational and medicinal users could potentially benefit from its uplifting and deeply relaxing effects.

Afgooey (sometimes known as Afgoo) is an indica-dominant hybrid that relies on potent landrace genetics to deliver strong, lasting sedation. As its name implies, this strain is descended from an Afghani indica landrace that has been crossed with flavorful Maui Haze. A staple strain in its own right, Afgooey has a rich and earthy flavor profile to complement its sleepy, weighty vibes. Cannabis testing lab Analytical 360 has found samples of Afgooey to have between 14% and 28% THC composition. In 2018 Emerald Cannabis Worx LLC contacted Wikileaf with a report of their lab testing results by Green Leaf Labs. The report boasted a whopping 30.10% Total THC for their variant of Afgooey.

Afgooey is marked by small to medium buds that adhere in the dense and solid bud structure that is often associated with indica varieties. These flowers range in shape from almost spherical to elongated and cylindrical. The tightly-coiled leaves are a bright shade of spring green and are threaded through with rust-colored hairs (which are actually pistils, intended to catch pollen from fertilizing male plants). The “goo” in Afgooey’s name refers to its copious amounts of resin, which ooze out of a blanket of trichomes.

This true breeding strain is a cross consisting of Afghani, Mexican Acapulco Gold and Columbian Gold genetics. It was the first stabilized marijuana hybrid in the Dutch cannabis world and has been bred since 1978. This branch of the cannabis tree has become notorious due to its potency and now the term “skunk” is used to refer to any very potent or powerful ganja.

Zambeza Skunk is one variety that sticks out as interesting and strong. The strain is sativa dominant and contains 75 percent sativa genetics and 25 percent indica genetics. The strain is the product of breeding parent strains Super Skunk, Acapulco Gold and Colombian Gold.

The sativa dominant nature of this strain lends towards a high that very much focuses on the head instead of the body. The sensation derived from this strain gets the cogs of the brain turning with its thought provoking aspects. In true sativa fashion the effects are very uplifting, cerebral and often euphoric.