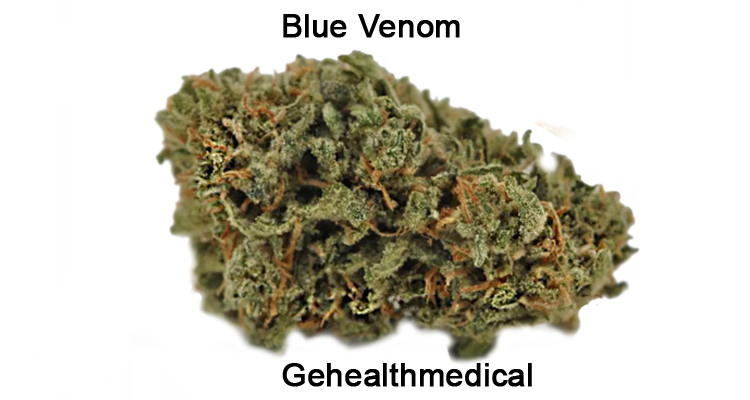 Blue Venom is a moniker for an excellent cannabis strain that sounds both glamorous and dangerous. Using cannabis means it’s potent. Perhaps more importantly, its effects are intense.

When it comes to this strain, a name can only tell you so much. Looking at its lineage one can see the powerhouse genetics that led to its birth. First, there is the berry that seems to transcend all other blueberries: The Blueberry. Blue Venom is known for its relaxing and pleasantly fragrant qualities.

Secondly, there is the infamous White Widow. Since its first introduction in the early 90s when it reached Dutch shores, this strain of cannabis has become a staple of shops and bars in Amsterdam. Blue Venom is one wicked hybrid that delivers a tantalizing energetic buzz,it is also incredibly potent and if one were to overuse, then expect psychedelic effects to hit hard.

Using these two strains, the breeder G13 Labs successfully crossed and created Blue Venom. As one can see now, its name was a playful reference to the names of its parent strains. But more than the name, this new hybrid also took some traits that made its parents legendary. A strain of marijuana that offers users physical relaxation and mental high.

Blue Venom, like the White Widow, is a very potent strain. In some tests, the THC ranges between 16% to 23%. Even at its low side, it has the strength to deliver powerful effects. If one were not careful, it could be overwhelming.

At its onset, the heavy-hitting Indica traits surge in along with its Sativa side. It can catch some people off-guard as with most strains; the Indica traits usually creep in after the cerebral high. At any rate, the sensation people feel is one of relaxation but energizing. In no time at all, users feel uplifted. As the effects continue to intensify, most people not only end up feeling happy but also euphoric. Heightened senses also accompany this. It is as if the body suddenly becomes in tune with the surrounding where everything becomes clearer and sounds become louder. Most users are likely to have a clear head and will find that it is easier to focus should they wish to do so.

At some point, users will settle down into deep relaxation. Even so, the Blue Venom will not cause foggy mind. Instead, some people may find themselves in introspection. It is also possible that a few people may have wandering thoughts. Eventually, drowsiness sets in. Venom OG, also known as Venom OG Kush is as classic a Kush strain as they come. This plant was created by crossing two solid flowers, namely Poison OG and Rare Dankness #1,

Use Blue Venom to the max and its effects intensify. However, it is not likely to have the same extreme effects as White Widow. Instead of an intense psychedelic experience, most users are likely to be knocked out earlier than usual.

Blue Venom has surprisingly large flowers that have a tight, dense bud structure usually associated with indicas. The tightly-packed leaves are a dark shade of forest green and are threaded through with vibrant orange hairs. Sometimes this strain is also streaked with muted shades of blue and purple. Finally, Blue Venom’s sky-high trichome production, passed on from White Widow, gives the already-colorful flowers a shiny white sheen and a very sticky texture.

Ripe with the fresh and fruity aroma of blueberries and some hints of citrus, Blue Venom is mouth-wateringly delicious. In fact, breaking open the buds releases a rich hashy, piney odor. Also, Blue Venom gives off a smooth, easy smoke when burnt and leaves behind a tart blueberry taste on exhale, along with a mild herbal kick.

Created by G-13 labs in Europe, this trophy child of a strain takes effect relatively quickly, initially exerting a pressure around the smoker’s eyes and temples. Users may detect an uptick in mood along with a sudden burst in energy. But, this results in a mood enhancement that sharpens the senses; users may find that external stimuli like sights and sounds take on a new dimension. Rather than fueling any kind of intense cerebral thinking, this strain frees up the mind and enhances creativity.

As the high wears on, Blue Venom tapers down into physical relaxation. Users will find themselves content to melt into their overall surroundings. Because of its progression from energetic stimulation into deep sedation; likewise, Blue Venom is best enjoyed in the afternoon or early evening. In addition, its effects can be long-lasting, even for experienced cannabis users.

Blue Venom can have several applications for medical cannabis patients as well. Its ability to relax the body can soothe aches and pains whether they’re temporary, as due to injury, or chronic. It’s also great for treating mild to moderate stress and depression. In addition, it can work against entrenched cases of insomnia. Blue Venom can even serve as a potent appetite stimulant. Because it is unlikely to bring about intense cerebral thinking, this can be a good option for those who are prone to panic.

Blue Venom cannabis strain’s high offers the body hum of an Indica. But along with relaxation comes a giggly and cerebral high that will eliminate any negativity from your mind.

Blue Venom emits a mild skunky odor with a strong fruity note of blueberry. Obviously, this is a trait inherited from the legendary Blueberry. As such, one can expect it to be delightful and incredibly enticing.

With its incredible aroma, it is hard to imagine how its flavors can upstage it. But that is what made Blueberry one of the best-tasting strains in the world, and the same flavors are evident with Blue Venom.Blue Venom Adverse Reaction

Using cannabis, one of the reactions that users should expect is the throat feeling dry. So, Blue Venom can induce that. Also, but to a lesser degree, it can also cause dryness of the eyes. One thing about using too much is that these symptoms will worsen. It is also likely that users will feel pressure between their eyes and temple. Other concerns include feeling a little dizzy. Some people may also be experiencing anxieties. Hence, there is a chance that a few may end up feeling a little bit paranoid.

Blue Venom does not contain much CBD. Hence illnesses which respond to that compound are not going to have any benefit from its use. For seizures and epilepsy, medical cannabis users should seek high CBD strains.

The strain does excel in helping people coping with mental illnesses or psychological and behavioral conditions. For instance, the euphoric and uplifting traits are effective in kicking out stress. Instead of worrying, users end up in bliss. At the same time, this is obviously beneficial for people in their battle against depression, PTSD, etc.

As mentioned, the stain induces drowsiness. If it is sleep that one needs, then sleep is what they get with the Blue Venom. Hence, this is an excellent strain to use at the end of the day.

Blue Venom thrives well in both indoor and outdoor environments. Typical of Indica plants, it has a dense bud structure but surprisingly large. It is possible that some of its phenotypes may come with shades of purple or blue.

The plant has a flowering period of 8 to 9 weeks. Its estimated yield per square meter is 12 to 16 ounces of buds.

It appears that Blue Venom prefers the open space. As such, each plant can produce up to a whopping 38 ounces.

Blue Venom, a cannabis strain with high levels of THC, has several medical applications. Its ability to relax the body can soothe aches and pains whether they’re temporary, as due to injury, or chronic. Blue Venom is a great for treating mild to moderate stress and depressionBlue Venom can serve as a potent appetite stimulant, which may work in conjunction with insomnia. It is unlikely to bring about intense cerebral thinking, making it an ideal option for those who are prone to panic attacks.