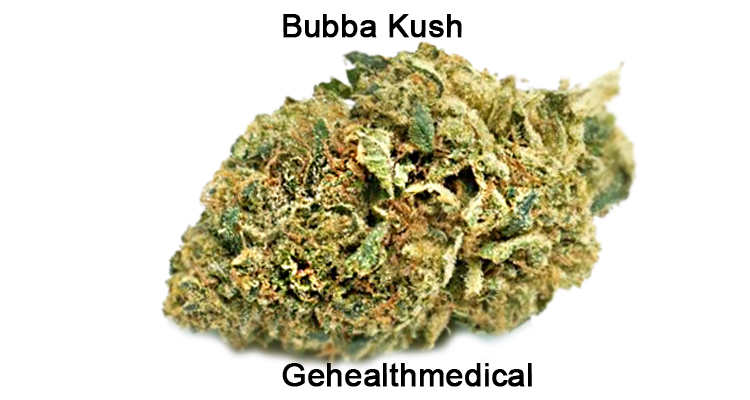 Bubba Kush may taste like chocolate and coffee, but this strain couldn’t be more different in terms of effects. This is a strain that has a huge reputation as a sleep aid, with couch locking capabilities and an ability to really relax you in a multitude of ways.

A famed native of California, Bubba Kush is said to have been created by crossing an OG Kush hybrid with an unknown indica rumoured to be from New Orleans. Its parentage is also known to stem from Northern Lights, however, it isn’t 100% certain.

Bubba Kush was created in 1996, and has since become somewhat of a sensation. It has gained notoriety in the United States for being heavy on the couch-lock, making Bubba Kush a popular and effective relaxant.

The Bubba Kush strain is classified as an indica strain, producing many of the effects expected from this variety, including happiness, muscle relaxation, sleepiness, couch-lock and increased appetite (here come the munchies!). Its genetic makeup is composed of around 15-23% THC, making it a potent and above-average strain in regards to THC content, and its makeup is composed of 70% indica and 30% sativa. Although its genetics are not pure bred indica, don’t cut this strain short, considering it has been proven to be a wonderful choice for pain relief, insomnia, nausea, loss of appetite, stress and so much more. Although the true origins of Bubba Kush are not 100% known, the Bubba Kush strain is believed to have OG Kush as one of its parent plants, with the rest of the genetic lineage sort of remaining a blur and a mystery.

Sleep; most of the world does not get enough of it, and yet it is something we physically need to function. With rest becoming such a valuable part of life, why is it that so many have not made it a priority? The answer; a large percentage of those who do not sleep enough have extreme difficulties actually falling asleep. Sure, your doctor can prescribe you barbiturates to knock you right out, but can’t there be another, natural solution that’ll leave you with fewer side effects and won’t run the risk of any addictions arising?

That’s where Bubba Kush weed comes in; after you take just a few hits, expect to feel your body melting away, nonetheless your mind will still stay clear and collected. This indica has gained extreme popularity for its powerful medicinal abilities in aiding those who have difficulties with appetite and sleep, the two most essential parts of life, causing the Bubba Kush strain to qualify as literally a lifesaver.

If you are trying to stay focused, this isn’t the strain for you. Bubba Kush has a high that is hazy and soothing, and plunges you in a dream-like state with an intense head high that can contain visuals. It can induce a state of relaxation, and sleepiness, if consumed in larger doses.

Expect to get the hardcore munchies from Bubba Kush weed, so have some stoner snacks on hand, otherwise you won’t be able to stop thinking about how hungry you are. With just a few hits, your high will be more subtle, but still you can expect to sink deep into whatever chair you’re sitting on. Don’t worry about brain fog, the Bubba Kush strain won’t contribute to this, and actually tends to keep the mind clear and concentrated, making sit-down chats and communicating no problem. Your words will be totally clear and coherent and your thoughts should remain simple. BK is certainly not a thought provoking strain, and doesn’t typically make its consumer more creative or introspective. Instead, it hits harder on the body and the emotions, so if you are someone that carries a lot of physical tension or someone who needs a positive and happy diversion from dark or intense emotions and thoughts, Bubba Kush is a brilliant option. Furthermore, as you begin to smoke or consume more and more of Bubba Kush, you’ll likely become sleepy, giggly, happy and even more hungry, all blending together into a jumble of pure euphoria and joy. If you’ve timed your smoke sesh right with your body clock, feeling all this relaxation and tiredness will be totally fine, the Bubba Kush can keep your belly full and knock you right out for a good night’s sleep. A happy, delightful mental high can be observed, often encouraging forgetting one’s day-to-day stresses and allowing for a deep unwinding. Expect some heavy eyelids, as this preferably night-time strain is guaranteed to physically blanket you in a cloud of sleepiness, much like the sandman has been around for a visit.

Its most common side effect is a feeling of dry mouth accompanied with dry eyes and a sensation of feeling dehydrated. A general feeling of being “stuck on your couch” can easily happen, because its strong indica properties can create a heavy-body sensation that can leave you feeling like you can’t move.

Bubba Kush has a very invigorating aroma, smelling much like coffee and roasted nuts at times. It has a hint of pine and earthiness, which rounds up its full-bodied fragrance. When smoked, Bubba Kush leaves a cloud of spice and sweetness that lingers in the vicinity.

Much like its aroma, Bubba Kush has a strong nutty taste to it. It has inherited the tanginess of its OG Kush heritage, making it taste reminiscent of pine and spice. Certain notes of chocolate and sweetness can be observed at times, and leaves an aftertaste that hints at a tootsie roll.

Bubba Kush is widely known as a heavy smoke, and generally isn’t recommended for a morning smoke. It can make you feel lethargic and dizzy if taken in small doses. In some cases, paranoia may be observed, especially in those who aren’t accustomed to its heaviness, causing a mild form of confusion and anxiety.

Its most common side effect is a feeling of dry mouth accompanied with dry eyes and a sensation of feeling dehydrated. A general feeling of being “stuck on your couch” can easily happen, because its strong indica properties can create a heavy-body sensation that can leave you feeling like you can’t move.

Bubba Kush is a famed medically used strain, due to its potency and effectivity. It is used to fight off feelings of stress and restlessness, and comes highly recommended for the treatment of pain.

Mental disorders can gain ample relief from Bubba Kush weed, as this calming and relaxing strain seems to be stunningly capable of healing any stress, anxiety, depression or paranoia one may be experiencing. If you are dealing with a mental disorder, consuming a balanced and “just-right” quantity of Bubba Kush cannabis is ideal, for overdoing it can lead to a worsening in symptoms (as with any weed strain). Additionally, BK is a top-notch selection for those who are suffering from serious illnesses such as cancer and HIV/AIDs, not because of a high CBD content, but rather because this mighty indica is astounding at aiding in the relief of pain, nausea, or other symptoms that are often attached to these serious illnesses.

A lack of appetite observed in those who are undergoing treatment for cancer, especially radiation and chemotherapy, may regain their hunger when using Bubba Kush. It is also highly effective as a powerful pain-reliever, healing many aches and pains both acute and chronic.

Bubba Kush won’t cure an illness from the inside out, but it certainly makes it easier to handle the everyday challenges and pains that are attached with a serious medical condition. If you are dealing with something that is more serious, you will want to up your dose of Bubba Kush and go for the consumption of an amount that is above average. Edibles, concentrates, candies and live resins, are all methods of consuming marijuana that are typically more potent than just your average ganja in a bowl.

Most of all, Bubba Kush is known for its mind-blowing capacity to help those who have trouble sleeping (insomnia), lack of appetite and even those fighting eating disorders. If you are experiencing one of the ailments listed above, just as those handling a more serious illness, a larger than average dose would be more effective at aiding and assisting any discomforts you might be going through.

Side Effects of Bubba Kush

When consumed too early in the day or too large of an amount, Bubba Kush can make its consumer become especially sleepy, since of course this potent indica is often used as a sedative for those dealing with insomnia. Due to this aspect, it is best to not use Bubba Kush as your go-to day time strain, and rather save it for once you’re complete with taking care of business, otherwise you might find yourself nodding away while important things are going on.

Aside from sleepiness being a result of Bubba Kush, those dealing with stress, anxiety, depression and other mental conditions who are consuming BK to help their symptoms should be cautious. As with any weed strain, over consuming cannabis can cause a heightening in paranoia, anxiousness and stress, especially in the physical sense, and even into the mental realm. It is vital that if you are intaking medical marijuana for mental conditions, be sure to keep awareness of your limits and respect those levels, otherwise you could end up finding yourself in a situation that is anything but fun and relaxing.

Bubba Kush specifically has a tendency to cause dry mouth and dry eyes. If you are experiencing cottonmouth from the Bubba Kush strain, be sure to drink plenty of hydrating fluids, such as ice cold water or an electrolyte drink. If your eyes need soothing, moisturizing eye drops can be purchased inexpensively from your local drug store. Try and have hydrating fluids and moisturizing eyedrops on hand at all times if you are a person that often gets dry mouth or dry eyes when consuming ganja.

The Bubba Kush strain is considered a relatively easy and simple cannabis type to cultivate, making it an suitable option for beginner growers or those who are just experimenting with raising one plant. If grown with care, Bubba Kush can produce potent and strong weed that is not only tasty, but also does not take up massive amounts of space. Due to its short height, which typically only extends to about 2-4 feet, Bubba Kush is a wonderful selection for indoor, under-a-light style growing. It can fit into low down closets, as well as cupboards and cabinets, depending on how much space you have available. Its natural inclination to be resistant to molds, pests and bugs, adds to its durability and keeps this crop on the low-maintence spectrum. However, just because a marijuana strain is low maintenance, doesn’t mean it no longer needs the usual care in order to produce medium to top-shelf quality ganja. Although weed can practically grow itself, good bud doesn’t arise from reefer crops that are neglected.

If your plant is healthy and grown outdoors, you can expect a yield of approximately 21-28 ounces per plant, with harvest season arising around mid-October. If cultivated indoors, around a 17 ounce yield per meter squared is considered an average to good result. All in all, the Bubba Kush cannabis strain is one worthy of putting time and energy into producing because of a decent yield size and an overall undemanding growing process.