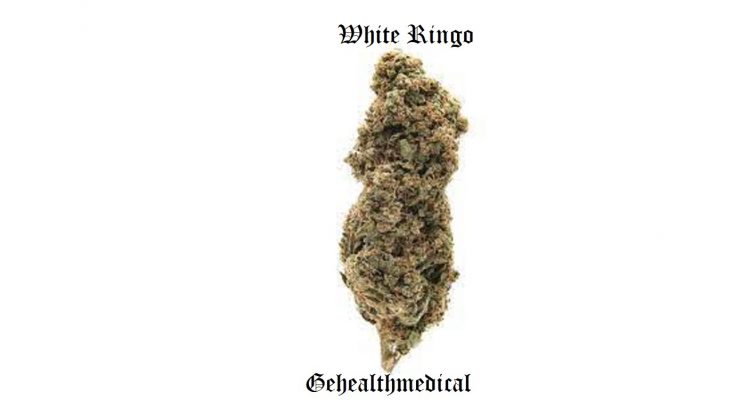 White Rhino is a potent Indica strain, and is easily recognizable with its short to bushy, light green to dark green leaves. The nugs are a hue best described as being silvery white and it is well known for its potency, which comes with a high that is hard and fast, mostly due to the high THC content which ranges from 14-20%. With its background of White Widow and a North American Sativa plant, it’s also known for its powerful aroma, which is a mix of an earthy, bitter, and would like to smell. It’s perfectly common to experience feelings of laziness, happiness, and euphoria after smoking this strain of weed, which is why it’s primarily used in the medical world to treat stress, pain, and insomnia. The primary negative effect of this strain is dry mouth, although dry eyes is a possibility. This strain is also known for being particularly durable, being able to be grown in extreme climates.

You can find out about Banana Sundae Marijuana Strain here!

Similar to its parent strain, White Widow, White Rhino possesses a distinctly earthy aroma that is backed up by elements of heavy wood, such as oak and maple.  You can expect to smell the tranquility of an old forest when first cracking up the bud, as well as a persistent sweetness that is not too dissimilar from sweet tree sap.

Once smoked, the sweetness begins to dissipate, being replaced by a profoundly oaken smell that is extremely reminiscent of antique shop furniture.

This simple strain possesses a wide variety of complexities not just in its aroma, but in its taste as well.

Like a lot of other indica strains, White Rhino’s taste is quite similar to its aroma. You can expect a great deal of earthy woodiness backed up by oddly tangy sweetness.

However, White Rhino is a strain whose flavor develops as the smoke progresses. The full taste of White Rhino is an exciting mix of the after taste of the matured oak that you get in the first mouthful combined with the oddly smoky quality you find in subsequent puffs that is strikingly similar to a wood fire.

White Rhino’s taste profile is hard to classify, as it is both reasonably typical of indica hybrids, but also somehow not.

You can expect a surprising mouthful of flavorful smoke whenever you smoke White Rhino, so look forward to enjoying its unique blend of wood, earth and background sweetness the next time you can get your hands on it.

How about appearance? How does White Rhino actually look, both as a plant and in its bud form?

As mentioned, White Rhino got its name thanks to its strangely pointy leaf and bud formations, making it look like a rhinoceros horn leering out from the plant.

Though White Rhino plants tend to grow rather bushy and wide, in keeping with most indica hybrids, it can also grow exceptionally tall as well.

The bud itself is beautiful, with abundant quantities of dripping trichomes that cling to the outer plant, giving it the appearance of having a white sugar coating all along the exterior.

If you want to get the most out of this exotic looking strain, it is best to try and grow it yourself. Let’s take a look at what kind of specialized knowledge you need to try and grow some White Rhino yourself.

White Rhino weed strain is an Indica dominant hybrid, and therefore the effects are powerful and even overwhelming to some less experienced users. The full effects and potency step in after some 10 minutes and you will be:

White Rhino cannabis and any other Rhino strain are well known for its high-quality medical attributes that provide great help to patients who suffer from:

These conditions can be treated successfully with this strain that gives heavy sedation that will make you sit relaxed and do nothing. Also, due to the high potency and frequent couch-locking effects, it is a great strain to consume before sleep.

In rare cases and often in cases when less experienced users take it, this weed can produce dizziness, paranoia or numbness. Therefore, use it with caution as it is a highly potent cannabis strain.

In every White Rhino review, we had noticed that growers praise it for the big yield. Thanks to genetics, crossing and getting the perfect phenotype, you can get up to 900 grams per square meter, especially when grown indoors in the Southern part of the sky. In indoor, with 600 Watt HPS you can easily pull out 600 grams per square meter. Thanks to the indica phenotype, White Rhino flowering time is usually around 10 to 12 weeks at most. If you grow it outdoors, you do not have to care about the diseases as it is a highly resistant plant that can withstand harsh conditions. Avoid growing it indoors. If you want to maximize the White Rhino strain yield and the quality, we highly suggest you growing outdoors, if possible in the warmer climate as it can flower up to 12 weeks.

The strain needs good soil, at least 40 litres, and requires regular fertilizing as it eats so much. It is not a big monster when it comes to height, reaching an average height of 50 inches, though if you plant it early in the spring, it can reach up to 80 inches. Also, it just loves Sun, so try to give it as much Sun as possible, as you will thank it later. The average yield that you usually get, in “average” conditions is 500 grams per square meter.

As a high strength indica hybrid, White Rhino falls under the general category of being extremely useful for mental disorders. A significant number of different strains can tout their abilities at combating conditions like these, such as excess stress, anxiety or depression.

The primary reason is that strains like White Rhino are bred to have extremely high levels of THC, which in turns causes a huge effect on the CB1 receptor in the endocannabinoid system in the body.

This allows the brain to help both mitigate negative feelings and emotions and to encourage the release of serotonin and other helpful neurochemicals.

White Rhino is also useful at helping deal with excess amounts of pain, due to the high quantity of THC’s effects on the brain’s pain detection.

However, by far the most useful medical aspect of White Rhino is in helping to treat insomnia. Like a lot of indicas, White Rhino is excellent at helping encourage users to fall asleep due to its hypnotic, couch-locking effects.

A lot of people have also reported that it is great at treating fibromyalgia and Chronic Fatigue Syndrome, as well as just generally improving the mood of whoever uses it.