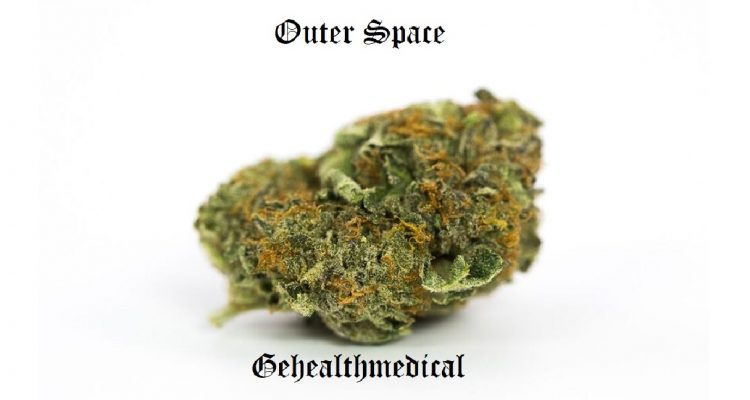 Outer Space definitely lives up to its extraterrestrial name, providing a cerebral, clear-headed high that’s ideal for daytime use. The effects are creative, focused, and happy, and they deliver a boost of sociability. It’s a good combination for treating a wide range of conditions: anxiety, depression, physical fatigue, ADHD, GI distress, migraine headaches, and mood disorders. Outer Space has almost no CBD, so it’s not a good selection for medicating seizure disorders or other conditions with symptoms that respond to CBD treatments. But THC levels are impressive, with available tests showing maximum results above 20%. That means a more potent, long-lasting high from this sativa-dominant cross of Mix of Trinity and Island Sweet Skunk, both sativa-heavy hybrids; the exact ratio of sativa to indica isn’t widely known. Outer Space tastes and smells of soil, berries, and citrus fruit. Reports suggest the most common negative side effects are cottonmouth and watery eyes, though others may be possible. This strain can be found in a handful of medical marijuana dispensaries in Colorado and Oregon, but it’s far from a common find anywhere.

Outer Space impresses with medium to large sized flowers that maintain chunky, irregular shapes. These buds have a characteristically indica structure, densely packed at their core and composed of small, tightly-coiled leaves. These leaves are a bright shade of spring green and are twisted through with vivid red and orange hairs — which are actually pistils, botanical reproductive structures meant to catch pollen. Finally, all visible nooks and crannies of Outer Space’s flowers are coated in translucent white trichomes, making them very difficult to break up without the help of a grinder.

You can find out about P-51 Marijuana Strain here!

When properly cured, flowers of Outer Space give off a pleasant floral aroma that may have some herbal hints of sage or lavender as well. A closer inspection may also pick up on some fruity notes of berry and orange. Meanwhile, grinding up or breaking open nuggets of Outer Space can yield the tangy odor of skunk. When it is combusted in a pipe or a joint, the strain gives off a smooth and fruity smoke that can be easily ingested. On the exhale, this smoke taste unambiguously sweet.

It’s not long before this otherworldly strain begins transporting its smokers out of their immediate surroundings. Within a few minutes of toking, consumers may feel a sudden throbbing around the temples and eyes, as well as some possible stimulation of the salivary glands. As these strange tics become more familiar, Outer Space reveals the full extent of its head high. The user’s state of mind amy feel quickly elevated, with certain ideas (or even objects) taking on a newfound fascination. Additionally, a kind of categorical, freely-associative thinking can cause thoughts to jump quickly from one to the next. This cerebral state can be an effective way to power through detailed analytical tasks as well as to work on more openended creative projects. Those who don’t feel quite as motivated, though, can simply enjoy this bud’s open-minded energy while contemplating the greater mysteries of the universe.

As this high progresses, some physically embodied effects may take over. Smokers who may have been active may find themselves slowed down and more willing to lounge on the couch than to be out and about. While Outer Space’s initial mental high persists, it may be somewhat clouded over by a kind of sensory distortion in which smokers experience visual distortions or an ineffable feeling of time dilation. Thanks to its mostly upbeat vibes, Outer Space is recommended for daytime or late afternoon consumption; if toked at night, it’s liable to keep users wide awake.

Outer Space’s mentally acute and physically relaxing effects can have some applications for medical cannabis patients also. The cerebral sense of concentration that comes with its onset can enable work on single tasks for those with attention deficit disorders. Additionally, the strain’s buzzy and pleasant energy can temporarily elevate mood for those dealing with moderate stress and depression. Outer Space can also dull physical pain, whether it’s temporary, as due to injury, or chronic, as due to conditions like lupus or arthritis. The strain’s tendency to induce the munchies can even work as an appetite stimulant for those who have lost their hunger due to disease or to treatments like chemotherapy. However, because it can result in some recursive patterns of thinking, Outer Space is not recommended for patients who are prone to paranoia or panic.

Unfortunately for home growers, seeds of this rare strain are not readily available online. Instead, those looking to cultivate Outer Space should obtain clippings from mature, healthy plants of the strain. Plants can be grown indoors or out, although outdoor success calls for a semi-humid climate with daytime temperatures between 70 and 80 degrees Fahrenheit. The strain’s indica-looking flowers suggest that its crops grow short and bushy with strong lateral branching; gardeners may want to occasionally trim away any light-blocking fan leaves to encourage the growth of flowering nodes throughout the plant. This strain reaches maturity after about 9 to 10 weeks.

Thanks to its multilayered properties, Outer Space is a solid smoke for indica and sativa lovers alike. Its ability to induce deep thinking and awe makes it a great option for late-night stargazing.

Not exactly appealing in the sense that you want to smell it regularly, this strain was a combination of a slightly creamy vegetal sweetness along with a more putrid, fecal, “cheese” type of smell that made us wrinkle our collective nose. It hints at potency, but isn’t terribly appealing to most people. The smell also weirdly seemed to disappear after a grinding rather than getting stronger.

Much like the smell, the taste wasn’t terribly appealing but wasn’t bad either — it gave off a light, spicy citrus with some smooth, almost creamy notes present along with a floral (one reviewer said “soapy”) quality. Contrary to many strains, this one seemed to taste better when you really go at it with the lighter rather than ‘sipping’ it, filling the mouth with a floral-tinged smoke.

A very heavy and nearly overwhelming Sativa experience started this one off — the brow sweated, the heart rate jumped, and a rising pressure filled the brow/forehead/eye area. Mentally it had us full of energy but a bit spaced-out, at least initially. The initial potency only lasted about 30 minutes (probably a good thing, it was a little much even for our veteran review staff), fading into a focused state where we found ourselves swept up in a single task that seemed to go on unabated for hours. Though not exactly couchlocked, that was basically the end result, as the singular focus on sedentary work/activities kept us engaged throughout. Some enduring head pressure was the last physical remnant of this med, and it faded out cleanly with only a little bit of a drained feeling.

Outer Space thrives both indoors and outdoors, but favors a warmer climate — 70-80 degrees Fahrenheit — if growing outside. Cultivators can expect to harvest between nine-to-ten weeks.

You can find out about Red Congolese Marijuana Strain here!